In the Pennsylvania Convention Center on a hot Tuesday afternoon in July, three other men and myself–all formerly incarcerated–are strategically ushered into a large empty exhibit hall by men in suits and dark glasses.

As we approached, I noticed a small makeshift room made out of blue curtains. Once we entered we were instructed to do two things “Stand when the President arrives” and “greet him Mr. President”. I sat in silence. My quiet, suspenseful excitement was broken by sounds of motorcade, squeaking tires against the polished cement floor and helicopters circling the building overhead.  In this short moment a surge of reality came over me, I am meeting President Barack Obama, the first President to address criminal justice reform to this magnitude and the first African American President of the United States of America. The sound of cars rumbling and the rapid movement of helicopter wings came to a sudden stop and the large, heavy blue drapes opened, revealing the great show of military-clad Secret Service agents swarming around a black limousine.

It was in this moment of opulence when the door to the limo opened while facing the entrance to our deliberately crafted, intimate space. President Obama stepped out, his hand extended, a warm welcoming smile, we all responded: “Hello Mr. President”.  He addressed each of us by name while he made his way around our small group to greet us, “Hello Mr. Sawyer,” he saiid. My mind quickly shifted: It was 1995, I was 17 years old, recently sentenced 8 to 20 years, an elder fellow inmate hands me a paper with a number saying “Remember this number” I respond: “Why?” he response in a firm, soft voice: “This is your name from now on: DC3617.”

President Obama held each of our attention, as he inquired about our stories, work, and our transition home after incarceration.  He framed each conversation with a hint of curiosity, guidance, and support, frequently referencing his intentions to create sweeping changes in the criminal justice system. His mission was to answer the question “How can we fully understand the problem, to better resolve it, without first  learning about the individuals that have lived it?” 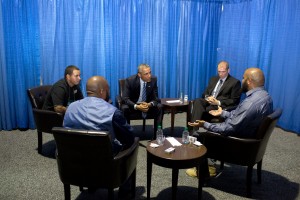 After our hour-long discussion, President Obama proceeded to deliver the keynote speech for the 106th NAACP Convention, making headlines across the world for his direct and passionate words that laid out the clear and immediate need for major criminal justice reform. His speech touched on the need to find alternatives to incarceration for non-violent drug offenders, to rethink re-entry and fight recidivism, and to intervene in young at-risk lives to ensure that youth have other options besides the school to prison pipeline. The following week President Obama met with inmates at a Federal Prison in Oklahoma–the first time a sitting president has ever visited a prison.

I was humbled, honored, and in the end I left feeling optimistic about the future, about the changes that must come, about my life trajectory, and for the opportunities that allowed me to go from a maximum security penitentiary to shaking the President’s hand and sharing my story. It is my hope that this new direction and sentiments expressed by the President are contagious. We have come a long way, but there is still much to do.

Read the Politico article I could have wound up in prison, Obama tells NAACP